On this page, you will find some information on former and ongoing projects:

In this project, we aim to better understand the perceptual foundations of risky decision-making. When choosing between safer and riskier options, human subjects tend to choose safer options –even when the expected (average) payoff of such options is lower. Why do subjects choose like this? Classical economic theories like expected utility and prospect theory suggest this has to do with valuation: subjects don’t like the riskier options.

We explore a complementary hypothesis: that risk aversion is (also) rooted in perception: subject do not completely ‘‘grasp’’ the larger payoffs magnitude of riskier options, because their perception is noisy and biased. In many domains such as numerosity, loudness, weight, and brightness, people tend to underestimate large magnitudes. So why would this be different for monetary magnitudes? This notion is formalized in a theoretical Framework developed by Khaw, Li and Woodford. 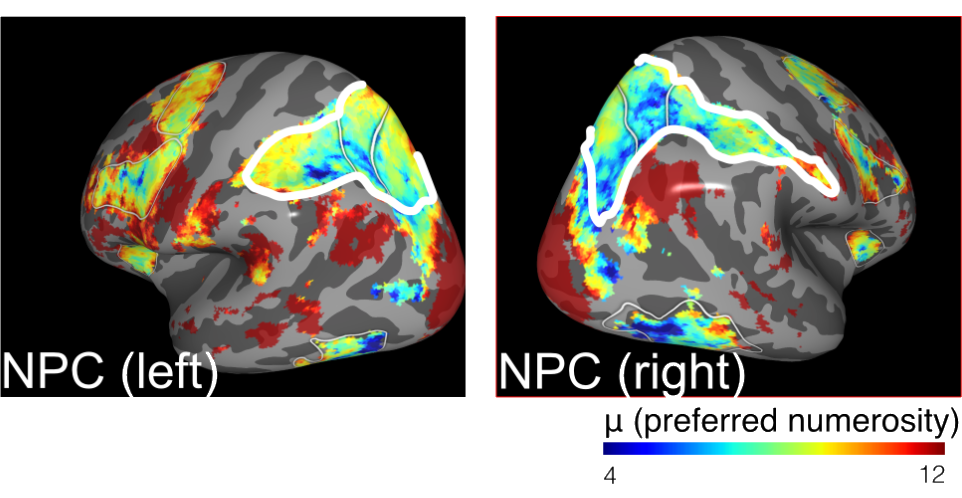 Numerical receptive field models measure to which numbers different patches of cortex are most responsive. It turns out that neurons in parietal cortex are sensitive to different numbers (number parietal cortex, NPC). Hence, they are a good target reason when one is interested in the neural representations that humans are using during economic decisions.

We built upon their work by using numerical encoding models that describe how neural activity in parietal cortex, as measured using fMRI, represents the numerosity of currently attended stimuli. These models are called numerical population receptive field models and built upon seminal work by Ben Harvey and Serge Dumoulin at Utrecht University.

Using such numerical encoding models, we showed that subjects that have particularly noisy numerical representations in parietal cortex, are also particularly risk-averse. This aligns with theoretical predictions of the model of Khaw et al.: the more noisy an individual’s perception is, the more he/she will revert to her priors/biases.

Currently, we are replicating these findings using 7T fMRI, to see if fluctuations in the fidelity of numerical representations can also predict trial-to-trial fluctuations in risk aversion.

The neural substrates of attention

Humans can actively process much less information than what they have in principle access to. Imagine crossing a busy street: you probably sequentially observe different aspects of the traffic situation before you commit to crossing the street. This moving ‘‘spotlight’’ is a form of selective attention.

By inverting population receptive field models, we can calculate the position of a stimulus given corresponding neural signals in the visual system. Moreover, we can also quantify the certainty we have about this position and thereby, possibly, the reliability of the underlying neural signals.

In this project, we first fit population receptive field models to see what part of the brain is representing what part of the visual field. Then, we invert those models to see ‘‘what the brain is representing’’ during a task and how these representations change as a function of attention. Moreover, because we use a Bayesian inversion scheme, we can also probe the fidelity with which stimuli are represented as a function of, for example, attention or retinotopic location.

Using the increased SNR of 7T MRI combined with surface coils (built with smaller coil elements that are placed very close to the skull), we can obtain functional MRI at an unprecedented resolution of 0.7 mm. This allowed us to measure individual maps of visual cortex that describe how the outside world is represented. Specifically, we visualized both *ocular dominance columns (ODCs) and retinotopic maps. So for each patch of primary visual cortex, we could visualize (1) to which part of the visual field and (2) to which single eye that patch of cortex was most sensitive. 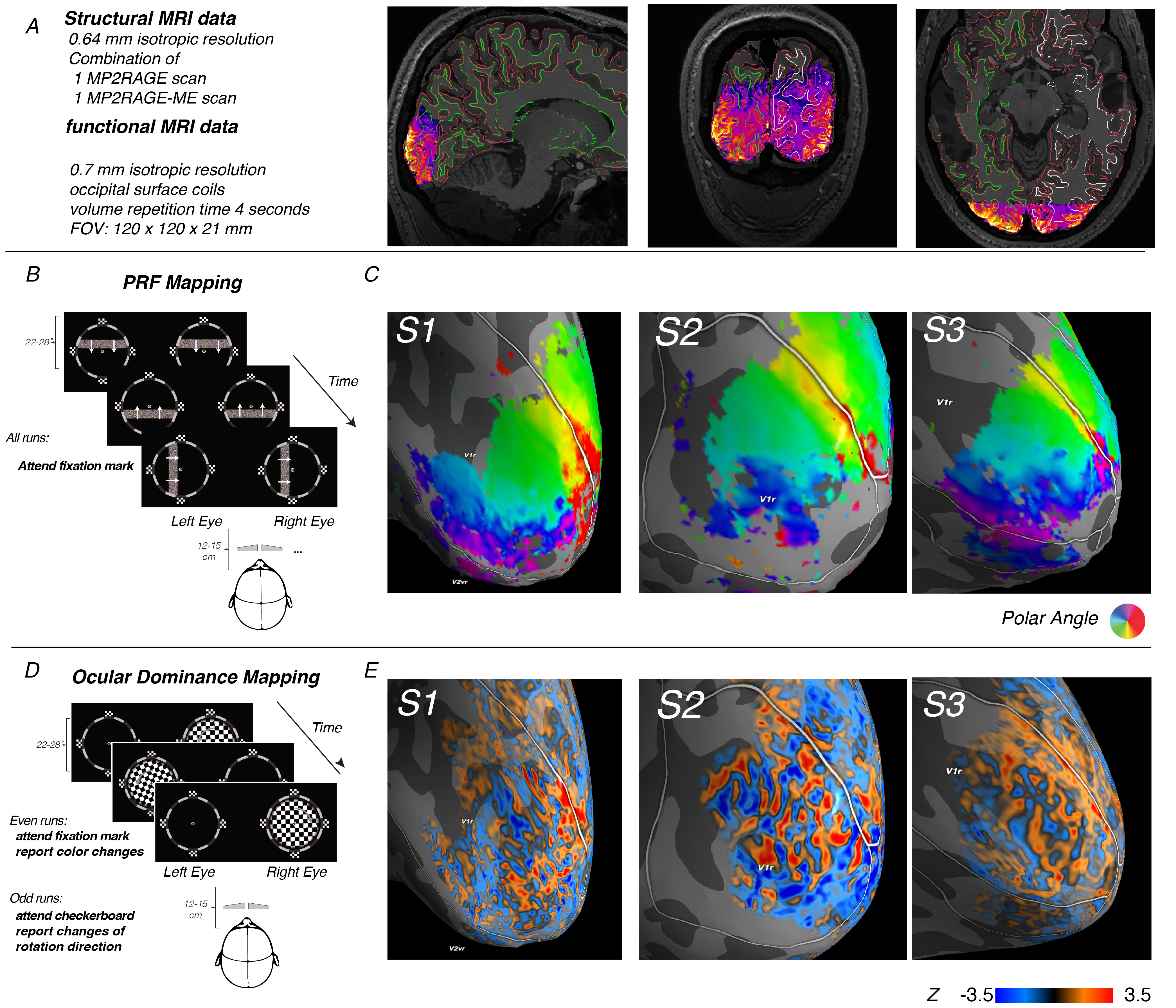 In this experiment, we mapped out the sensitivity of neurons in primary visual cortex (V1) to different parts of the visual field, as well as different eye using fMRI. (A) our field of view only included the occipital pole and thereby the foveal parts of V1. The data was carefully registered to a 0.64mm T1-weighted anatomical image. (B) We performed a standard PRF mapping paradigm and PRF model to quantify to which parts of the visual field different patches of V1 were most sensitive. This allowed us to relate columnar patterns to retinotopy, as well as define the border between V1 and V2 by the charachteristic phase reversals in retinotopy. (C) By presenting flickering checkerboards seperately to the two eyes, contained by a salient frame that helped eye convergence, we could map out ocular dominance columns: little ~1mm-wide stripes of corte that are particularly sensitive to the left or right eye.

Moreover, due to the 0.7mm resolution, we could also dissociate fMRI activity across different laminae. Specifically, we could show that whereas differential input to the eyes mainly affected the fMRI signal at deep and middle depth, corresponding to infragranular and granular layer, an attentional manipulation almost exclusively impacted signal at superficial depth, corresponding to supragranular layers. Crucially, these findings nicely mirror findings in electrophysiological recordings in rodents and non-human primates, as well as neuroanatomical tracing studies that show that feedback projections largely terminate in supragranular layers, whereas feedforward and sensory input largely terminates in granular and infragranular layers.

In sum, this project was a nice illustration of the potential of 7T fMRI to move beyond golfball-sized “blobs” in an MNI standard space, and move towards individualized neuroimaging that focuses on individual representations of the outside world.